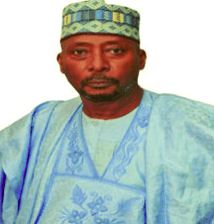 Mohammed MunirJaru, OFR, mni is the Chairman of the Board of Directors of National eAuthentication Ltd.

He holds an LLB and LLM from the Ahmadu Bello University (ABU) Zaria. A former Managing Director/CEO National Maritime Authority, Lagos. He started his career as a Lecturer at the Ahmadu Bello University, Zaria from 1981-1983. He was at various times Commissioner in Kaduna State. From 2001-2005, he was the President, Kaduna Chambers of Commerce, Industry Mines & Agriculture (KADCCIMA). He was appointed Chairman, National Export Processing Zones Authority from 2001-2004. He serves in various Federal/State committees and Non-Governmental Organizations. He is currently the District Head of Hanwa, Sabon-Gari, Zaria. He was awarded member, National Institute of Policy and strategic Studies (mni) by NIPSS, Kuru in 1991 and also a recipient of the Officer of the Order of the Federation (OFR) 2003.